It is very satisfying for parents to see their children in pursuit of knowl­edge. It is natural and healthy for the children, and in the first few years of life, the pursuit goes on during every waking hour. But after a few short years, most kids go to school. The schools also want to see children in pursuit of knowledge, but the schools want them to pursue mainly the school's knowledge and devote twelve years of life to doing so.

In his acceptance speech for the New York City Teacher of the Year award (1990), John Gatto said, "Schools were designed by Horace Mann ... and others to be instru­ments of the scientific man­agement of a mass popu­lation." In the inter­ests of managing each generation of children, the public school curricu­lum has become a hopelessly flawed attempt to define education and to find a way of delivering that defini­tion to vast numbers of children.

The traditional curriculum is based on the assumption that children must be pursued by knowledge because they will never pursue it themselves. It was no doubt noticed that, when given a choice, most children prefer not to do school work. Since, in a school, knowl­edge is defined as school­work, it is easy for educators to conclude that children don't like to acquire knowledge. Thus schooling came to be a method of controlling children and forcing them to do whatever educators decided was beneficial for them. Most children don't like textbooks, workbooks, quizzes, rote memorization, subject schedules, and lengthy periods of physical inactivity. One can discover this - even with polite and coopera­tive children - by asking them if they would like to add more time to their daily schedule. I feel certain that most will decline the offer.

Children pursue life, and in
doing so, pursue knowledge.

The work of a schoolteacher is not the same as that of a homeschooling parent. In most schools, a teacher is hired to deliver a ready-made, stan­dardized, year-long curriculum to 25 or more age-segregated children who are confined in a building all day. The teacher must use a stan­dard curriculum - not because it is the best approach for encouraging an individual child to learn the things that need to be known - but because it is a conve­nient way to handle and track large numbers of children. The school curricu­lum is understandable only in the context of bringing admin­istrative order out of daily chaos, of giving direction to frus­trated children and unpredictable teachers. It is a system that staggers ever onward but never upward, and every morning we read about the results in our newspapers.

But despite the differences between the school environment and the home, many parents begin home­schooling under the impression that it can be pursued only by following some variation of the tradi­tional public school curriculum in the home. Preoccupied with the idea of "equivalent education", state and local education officials assume that we must share their educational goals and that we home­school simply because we don't want our children to be inside their build­ings. Textbook and curriculum publishing companies go to great lengths to assure us that we must buy their products if we expect our children to be properly edu­cated. As if this were not enough, there are national, state, and local support organi­zations that have practically adopted the use of the traditional curriculum and the school-in-the-home image of home­schooling as a de facto membership requirement. In the midst of all this, it can be difficult for a new home­schooling family to think that an alterna­tive approach is possible.

One alternative approach is "unschool­ing", also known as "natural learning", "experience-based learning", or "inde­pendent learning". Several weeks ago, when our homeschooling support group announced a gathering to discuss unschooling, we thought a dozen or so people might attend, but more than 100 adults and children showed up. For three hours, parents and some of the children took turns talking about their home­schooling experiences and about unschooling. Many people said after­ward that they left the meeting feeling rein­forced and exhilarated - not because anybody told them what to do or gave them a magic formula - but because they grew more secure in making these decisions for them­selves. Sharing ideas about this topic left them feeling empowered.

Before I talk about what I think unschool­ing is, I must talk about what it isn't. Unschooling isn't a recipe, and therefore it can't be explained in recipe terms. It is impossible to give unschooling directions for people to follow so that it can be tried for a week or so to see if it works. Unschooling isn't a method, it is a way of looking at children and at life. It is based on trust that parents and children will find the paths that work best for them - without depending on educational institutions, publishing companies, or experts to tell them what to do.

Unschooling does not mean that parents can never teach anything to their child­ren, or that children should learn about life entirely on their own without the help and guidance of their parents. Unschool­ing does not mean that parents give up active participation in the education and development of their children and simply hope that something good will happen. Finally, since many unschooling families have definite plans for college, unschool­ing does not even mean that children will never take a course in any kind of a school.

Then what is unschooling? I can't speak for every person who uses the term, but I can talk about my own experiences. Our son has never had an academic lesson, has never been told to read or to learn mathematics, science, or history. Nobody has told him about phonics. He has never taken a test or been asked to study or memorize anything. When people ask, "What do you do?" My answer is that we follow our interests - and our interests inevitably lead to science, literature, history, mathe­matics, music - all the things that have inter­ested people before any­body thought of them as "subjects".

A large component of unschooling is ground­ed in doing real things, not because we hope they will be good for us, but because they are intrinsi­cally fascinating. There is an energy that comes from this that you can't buy with a curriculum. Children do real things all day long, and in a trusting and support­ive home environment, "doing real things" invariably brings about healthy mental development and valuable knowledge. It is natural for children to read, write, play with numbers, learn about society, find out about the past, think, wonder and do all those things that society so unsuc­cess­fully attempts to force upon them in the context of schooling.

While few of us get out of bed in the morning in the mood for a "learning experience", I hope that all of us get up feeling in the mood for life. Children always do so - unless they are ill or life has been made overly stressful or confusing for them. Sometimes the problem for the parent is that it can be difficult to determine if anything import­ant is actually going on. It is a little like watching a garden grow. No matter how closely we examine the garden, it is difficult to verify that anything is happen­ing at that particular moment. But as the season progresses, we can see that much has happened, quietly and naturally. Children pursue life, and in doing so, pursue knowl­edge. They need adults to trust in the inevitability of this very natural process, and to offer what assistance they can.

Parents come to our unschooling discus­sions with many questions about fulfilling state requirements. They ask: "How do unschoolers explain them­selves to the state when they fill out the paperwork every year?", "If you don't use a curricu­lum, what do you say?" and "What about required record-keeping?" To my knowl­edge, unschoolers have had no prob­lems with our state department of educa­tion over matters of this kind. This is a time when even many public school educators are moving away from the traditional curriculum, and are seeking alternatives to frag­mented learning and drudgery.

When I fill out the paperwork required for homeschooling in our state, I briefly describe, in the space provided, what we are currently doing, and the general intent of what we plan to do for the coming year. I don't include long lists of books or describe any of the step-by-step skills associated with a curriculum. For example, under English / Language Arts, I mentioned that our son's favorite "subject" is the English language. I said a few words about our family library. I mentioned that our son reads a great deal and uses our computer for what­ever writing he happens to do. I con­cluded that, "Since he already does so well on his own, we have decided not to introduce language skills as a subject to be studied. It seems to make more sense for us to leave him to his own continuing success."

Unschooling is a unique opportunity for each family to do whatever makes sense for the growth and development of their children. If we have a reason for using a curriculum and traditional school materials, we are free to use them. They are not a universally necessary or required component of unschooling, either educationally or legally.

Allowing curriculums, textbooks, and tests to be the defining, driving force behind the education of a child is a hind­rance in the home as much as in the school - not only because it inter­feres with learning, but because it interferes with trust. As I have mentioned, even educators are beginning to question the pre-planned, year-long curriculum as an out-dated, 19th century educational system. There is no reason that families should be less flexible and innovative than schools.

I am beginning to suspect all elaborate and special systems of education. They seem to me to be built upon the supposition that every child is a kind of idiot who must be taught to think. Whereas if the child is left to himself, he will think more and better, if less "showily". Let him come and go freely, let him touch real things and combine his impres­sions for himself... Teaching fills the mind with artificial associations that must be got rid of before the child can develop independent ideas out of actual experiences.

Unschooling provides a unique oppor­tunity to step away from systems and methods, and to develop independent ideas out of actual experiences, where the child is truly in pursuit of knowledge, not the other way around.

Copyright 1994 Earl Stevens. Reprinted with permission of the author. 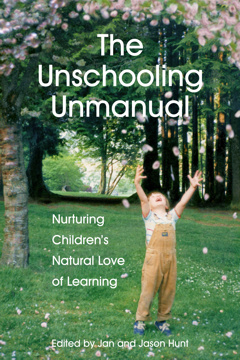 This article appears in The Unschooling Unmanual, one of several essays by educators and parents on the philosophy and experience of unschool­ing, selected and edited by Jan and Jason Hunt.

"A great introduction to unschooling." - Rita Brhel, The Attached Family